There was an interesting development over the weekend in the NAFTA re-negotiations.
Canada’s negotiating team put a demand on the table that the US effectively end so-called “right to work” laws.  ‘Right to work’ is an acronym used to describe laws in the US that permit workers at unionized workplaces to opt out of paying their fair share of union dues for services (collective bargaining, contract administration, grievance arbitration, etc) while still requiring unions to represent the workers. 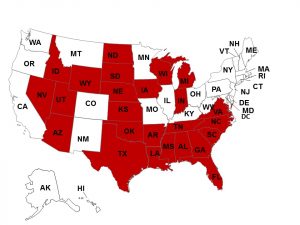 In other words, right to work laws require unions in the United States to provide free professional services and representation to non-members.  “Right to work” laws have deep roots in the racist South, where whites were angered that they could be required to pay into an association that represents black and Jewish workers.
Today, Republicans cling to ‘right to work’ laws with an almost religious fervour, arguing that the laws are necessary to protect “freedom of choice”.  The main practical objective of ‘right to work’ laws though is to encourage non-union workplaces.  The idea is that if workers can receive services for free (including higher wages and better benefits and job security), why would they pay, and if workers don’t pay dues, then unions will not be able to fund their services and they will go away or, even better, disappear from the US altogether.
It is no coincidence that ‘right to work’ states (states that have enacted laws allowing workers to refuse to pay union dues) have both lower unionization rates and greater income inequality.  Unions bargain higher wages and better benefits for workers because they have more bargaining power than do individual workers.  Check out this helpful chart which I posted on a blog entry from 2014.  Red dots represent US “right to work” states, with union coverage on the bottom axis and income inequality on the side axis. 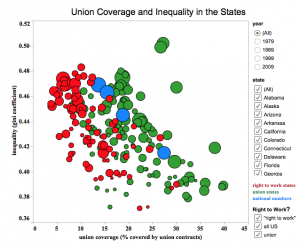 It’s easy to see why corporations might prefer ‘right to work’ states.  Workers are cheaper and easier to fire because they are more likely to be nonunion and therefore enjoy little bargaining power.  The red dots represent the biggest threat to decent Canadian jobs, since they represent states that compete for jobs by offering low wages and benefits and no collective bargaining.  Not surprisingly, Republicans argue that ‘right to work’ laws “create jobs”, although they often refuse to admit the obvious reason why they might do so–because they encourage a low wage, low benefit, compliant nonunion workforce.
Many Conservatives in Canada would LOVE to have to right to work laws here too.   Ralph Klein’s Alberta Tories, Harper’s Federal Tories, and Tim Hudak, leader of the Ontario Conservative Party have all explored the possibility, but to date no Canadian government has passed a law allowing unionized workers to obtain a free ride.  Klein’s government studied the issue and ultimately decided it was not good policy for Alberta.  Harper and Hudak both lost elections.   I have discussed in earlier posts how a Canadian ‘right to work’ law would probably take a different legal form than the American model because of differences in our laws.  However the point would be the same:  to undermine unions in order to undermine collective bargaining and silence union political voice.
When NAFTA was being negotiated, Americans made a big deal about the possibility of American jobs being ‘sucked’ south to Mexico, as Ross Perot famously argued in opposition to NAFTA:

“It’s pretty simple: If you’re paying $12, $13, $14 an hour for factory workers and you can move your factory South of the border, pay a dollar an hour for labor,…have no health care—that’s the most expensive single element in making a car— have no environmental controls, no pollution controls and no retirement, and you don’t care about anything but making money, there will be a giant sucking sound going south. …when [Mexico’s] jobs come up from a dollar an hour to six dollars an hour, and ours go down to six dollars an hour, and then it’s leveled again. But in the meantime, you’ve wrecked the country with these kinds of deals.”

There were similar concerns in Canada, but we were also concerned about good Canadian jobs being sucked to low wage, low regulation American states.

Americans don’t like to face the reality that the US is a low wage, low regulation state that undermines the preservation of decent jobs in other jurisdictions.

An important argument made by Canadian opponents during  both the CUFTA (1988) and NAFTA (1992) negotiations was that Canadian labour laws would slowly be eroded and pulled down to low level of American laws.  This would happen because Canadian governments would argue that they need to “compete” with low wage American states for jobs by promising lower labour costs and a more “flexible” [read nonunion, weak employment standards] labour force.
There is evidence that these predictions came to pass.  For example, in the late 1980s, before CUFTA and NAFTA, almost every Canadian jurisdiction used the “card check” model of union certification which permits unions to prove majority support by submitting union membership cards on behalf of a majority of workers.  In the years after NAFTA was enacted, most jurisdictions shifted to a “mandatory ballot model” used in the US which requires both collection of union cards and a vote following an employer led opposition campaign.  Studies confirm that unions win certification much more often under the card check model than under the mandatory vote model.
The following chart (now a bit out of date, but you see the trend) shows how the private sector unionization rates in the two countries are following the same trajectory, with Canada a couple of decades behind the US.  CUFTA and NAFTA provide part of the explanation for the precipitous fall in Canadian union density since 1988, including the loss of good paying unionized manufacturing jobs to lower wage, lower regulation, lower union density jurisdictions combined with regressive labour law reforms designed to discourage collective bargaining.

As I discuss in Chapter 35 (International Law, Trade Law, and Globalization) of The Law of Work text, whenever a Canadian government introduces laws that make life more difficult for employees seeking collective representation, they point to the need for labour laws to compete with less labour friendly jurisdictions, in particular, the United States.  Politicians point to factories in Canada that have closed and moved to low wage, “right to work” states as evidence of the need to compete by offering similar weak labour legislation.  Remember this recent Caterpillar debacle, for example?
In this way, the prediction that NAFTA (and CUFTA) would act as a “conditioning framework” that drives protective work laws downwards has support.  Therefore, it is not surprising that Canada would raise the destructive pressure of regressive American labor laws in negotiations to revise NAFTA.  The NAFTA era has coincided with growing income inequality in both countries and the move to undermine collective bargaining is an obvious part of this story.
It would be foolhardy to believe a Trump led Republican government would ever consider abolishing the right of states to enact ‘right to work’ laws.  However, I credit the Canadian negotiators for shining a spotlight on the destructive force of American laws designed to keep wages low and block the spread of collective bargaining.  The move exposes the hypocrisy of American lawmakers lecturing other nations on the practice of attracting investment by promising low wages and weak labour regulation.
Questions for Discussion
NAFTA does not include any enforceable labour rights clause.  Does this mean that NAFTA has no effect on the labour laws of the participating countries?  Explain.
Given that it seems highly unlikely that the Americans would agree to the Canadian demand to prohibit “right to work” laws, why do you think the Canadians made the demand at all?

Professor Doorey is an Associate Professor of Work Law and Industrial Relations at York University. He is the Director of the School of HRM at York and Director of Osgoode Hall Law School’s executive LLM Program in Labour and Employment Law and on the Advisory Board of the Osgoode Certificate program in Labour Law. He is a Senior Research Associate at Harvard Law School’s Labor and Worklife Program and a member of the International Advisory Committee on Harvard University’s Clean Slate Project, which is re-imaging labor law for the 21st century

A Successful Strike Vote is All That Stands...

@SCLSclinic and I were so fortunate to represent this client last year. I am thrilled that this decision brings more clarity for family status accommodations rights amidst a pandemic that has tested parents, caregivers, and families like never before. https://twitter.com/CanLawWorkForum/status/1364605259071561730

Here's my latest in @jacobinmag.

If Ontario's labor laws applied in Alabama, the Amazon vote would have been held months ago so workers could get back to their jobs. Instead, the NLRA permits Amazon to conduct a months' long onslaught of anti-union propaganda. https://twitter.com/jacobinmag/status/1364613560425275392

Amazon workers in Alabama are voting on whether to unionize, but the company is bombarding them with anti-union propaganda. In Canada, by contrast, votes are held quickly, making it harder for companies to stack the deck — a model that can work in the US. http://jacobinmag.com/2021/02/amazon-alabama-canada-labor-law-union-vote