Can an Employer Order a Female Employee to Wear a Bra at Work?

A server at East Side Mario’s restaurant in Timmins is in the news this week alleging that her employer is requiring her to wear a bra at work as part of the company’s dress code.  Here’s a passage from the CBC print story:

“It’s a violation of my rights as a person to dictate my undergarments,” says Geneviève Loiselle, who started working at the chain restaurant in May. “It was a really sexist thing to do.”
Loiselle is also upset over how the situation was dealt with. She alleges the manager took her aside before her shift on Sept. 2 and told her she needed to wear a bra as part of her work uniform.  “She like literally was looking right at my breasts and said, ‘Well, Gen, I can clearly see that you’re not wearing a bra and that you have nipple piercings,'” says Loiselle.

This is a great story to open another term of Employment Law courses!  Can East Side Mario’s enforce a work dress code that requires female employees to wear bras at work?

Working Through the Legal Analysis

The first thing you should ask yourself is what legal regime would apply to this situation.  As explained in Chapter 1 of The Law of Work, there are three regimes of work law to consider: Common Law, Regulatory Law, and Collective Bargaining Law. 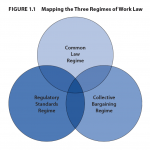 I presume that this East Side Mario’s is non-union, so we don’t need to worry about the Collective Bargaining Regime and rules about dress codes developed by labour arbitrators or any rule that might be found in a collective agreement.
The Common Law Regime includes both the law of employment contracts and tort law.  It is possible that

the employment contract here includes something about the right of the employer to enforce a dress code.  The story refers to a dress code, but that dress code says nothing about bras or underwear apparently.   We want to more about about what the contract says, and whether the dress code forms part of the contract and what other rights or limitations are written into it, if anything.
However, in a nonunion workplace, the employer is generally  entitled to terminate an employee who disobeys an order.  If the employer insists on its “mandatory bra” rule and the employee refuses to comply, the employer could terminate her (subject to the important proviso below).  Whether the refusal to wear the bra would amount to gross insubordination justifying “summary dismissal” without notice is a question.  I suspect not, so that the employer would probably be required to give the employee notice of termination or pay in lieu of notice, subject to the terms of the contract and how long she has been employed.  Do you think the employer would have grounds for “summary dismissal” (see Chapter 14 of the book).
However, all of this talk about the right of an employer to enforce a dress code at work is subject to the important proviso that a dress code cannot violate human rights legislation. Thus, the Regulatory Regime is probably the most important one here, and the Ontario Human Rights Code in particular.  No one can contract out of human rights legislation.  The Code (Section 5) prohibits discrimination at work on the basis of a bunch of grounds, including gender (see Chapter 26, 27).  If the dress code is discriminatory against women, then it is illegal, unless the Code provides the employer with a valid defence.  Therefore, human rights issues at work require a two step analysis, as I explain in this chart from Chapter 28 of the book. 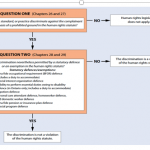 Is a rule requiring women employees to wear a bra at work discrimination on the basis of a prohibited ground?  The employee notes in the story that there is no rule requiring male employees, even men with “larger breasts” than her, to wear undergarments.  The employer responded that this was comparing apples to oranges, since the public look at women’s bodies differently.

What do you think:  Does the rule discriminate on the basis of a prohibited ground?

If so, then the next question is whether the Code nevertheless permits the employer to discriminate in this case because there is a statutory defence.  Take a look at the defences listed in the box in the above chart.  Which of those do you think might be available to East Side Mario’s to defend the dress code?
Check out Section 24(1)(b) of the Human Rights Code, which must be read with Section 24(2).  For ease, I will set it out:

24. (1) The right under section 5 to equal treatment with respect to employment is not infringed where,

(2) No tribunal or court shall find that a qualification under clause (1) (b) is reasonable and bona fide unless it is satisfied that the circumstances of the person cannot be accommodated without undue hardship on the person responsible for accommodating those circumstances considering the cost, outside sources of funding, if any, and health and safety requirements, if any.

Do you think that East Side Mario’s could bring itself into this defence in its defence of the “mandatory bra for female employees” rule?

What would you advise ESM’s to argue?

Do you think that argument would succeed?  Why or why not?

Artificial Intelligence Is Now a Pentagon Priority. Will...

Who Are the Trade War Losers? Just Look...

Anyone know a case where court discusses the effect of a non-competition clause on the length of reasonable notice required by employer?

I’d assume it would lengthen the period since these clauses are intended to restrict availability of similar employment.

This story about workers not showing up for work and the harm it causes employers would have worked better if it also discussed the flip side, employers who schedule workers last minute, change schedules, and cancel shifts.

Some important comparative cross-border analysis from ⁦@TheLawofWork⁩ about strikes and back-to-work legislation. https://onlabor.org/lessons-for-the-railway-showdown-from-a-victory-in-canada/