Does the City of Toronto Intend to Impose a New Contract on City Workers?

The media is reporting today that the City of Toronto has requested what is known as a “No Board Report” from the Minister of Labour in its ongoing negotiations with CUPE, Local 416 (the outside workers).
A ‘no board report’ is slang for a notice that is released pursuant to Section 79(2) of the Labour Relations Act in which the Minister of Labour’s 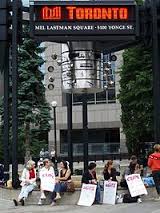 office send the union and employer a letter indicating that it will not order a “conciliation board’ to be appointed to try and help resolve the bargaining dispute.  Although the Minister has the option of appointing a conciliation board after conciliation with an individual government conciliator fails to lead to a new collective agreement, the Minister rarely does so.  The significance of the ‘no board report’ is that it starts the clock ticking towards a legal strike or lockout.  Section 79 says that a strike or lockout is legal once “14 days have elapsed” since the issuance of the notice.
By requesting the ‘no board report’, the City is moving things along towards a legal strike/lockout date.  This explains why the CBC headline reads “City of Toronto moves closer to Lockout of 6000 outside workers“.  However, a lockout might not be what the City plans at all.  My guess is that an alternate strategy worked so well in 2012, that they the employer thought it would try it again in 2016.
Clues to Future May Lie in Recalling the Past
Regular readers of this blog might recall that I did a blow by blow account of the 2012 bargaining as it happened.  You can read the entire chronology here.
Looking back at that bargaining helps us see where we are heading this time.  Back then, Rob Ford and his negotiating team had promised it would win language that would allow it to fire hundreds of garbage collectors so they could contract out those jobs.  The union resisted, but also it wanted to avoid another work stoppage, knowing that it would not have much public sympathy following upon the unpopular 2009 strike.
On January 12, 2012, the City requested a no board report, just as it has done so today.  The very next day, the union proposed a wage freeze, which the City rejected.  The City was proposing a small raise, with the condition that the union agree to language that would allow the firing of the garbage collectors.   On January 18, 2012, the Minister issued a No Board Report, with the result that a legal strike / lockout date was set for February 5, 2012.   Bargaining continued after this, but it was clear that the City had no intention of agreeing to any deal that did not allow it to terminate a large number of garbage collectors so it could then contract out that work.  The union expressed concern in the days leading up to February 5 that the employer intended to lockout its members.
However, the City had other plans.  Its strategy was made public on February 3 when it announced that rather than lock out the workers, it intended to adopt the other strategy available to employers under our labour laws:  it intended to unilaterally impose its final offer over the wishes of the union.   Here is what the City’s memorandum to the workers said that day:

Given the lack of a settlement and the distance between the parties, I have concluded, in consultation with the City’s Executive Director of Human Resources, my Senior Management Team, the City Solicitor’s Office, and our external legal counsel, that it would be inappropriate to delay the necessary changes to the collective agreement if we are unable to negotiate a new agreement. To be clear, the Labour Relations Act, 1995 provides the City of Toronto with the ability to implement new terms of employment once the negotiations have broken down and after the 17- day No Board period has expired. Based on those consultations, I have decided, if we do not reach a new agreement by the deadline, that it would be appropriate and necessary to exercise this option. The City, in tabling its proposals has told Local 416 that if the parties fail to reach a negotiated settlement by 12:01am Sunday, February 5, 2012, it will be implementing changes that include new or modified terms and conditions of employment for employees represented by Local 416 beginning February 5, 2012, –

Faced with this threat, CUPE quickly reached a deal that gave the City what they wanted, language that allowed it to terminate many unionized workers and contract out their jobs to a private, non-union contractor.  The City may be using the threat of unilateral imposition of contract terms again in order to win concessions from CUPE.
A New Twist This Time
But there is one potentially important difference this time.  In 2012,  CUPE did not take a strike vote, either because it wanted to send a signal to the public that it had no interest in another work stoppage or because it was concerned it wouldn’t win the vote.  Either way, by not taking a strike vote, CUPE was not in a position to respond effectively if the City imposed contract terms after the strike / lockout date passed.  That’s because a union can only strike in Ontario if he has held a successful strike vote.   Having not taken a strike vote, the unionized workers could not legally strike once the employer imposed contract terms.   The Faculty Union at Windsor recently ran into the same problem:  the union did not conduct a strike vote and then when the employer imposed contract terms, it had to try and scramble together faculty over the summer to hold a strike vote.
This time CUPE has taken a successful strike vote.  Therefore, if the City imposes contract terms after the legal strike / lockout date is reached, CUPE members can either walk off the job completely, or they can hold rotating strikes, or they can Work to Rule (simply show up to work and sit at their desks doing little or no work).  All those actions would be lawful, since the union is in a legal strike position.  Therefore, although the City seems to be following a familiar script, it is far from clear that the story will play out precisely as it did in 2012.
Issues for Discussion
1.    Do you think the City intends to lockout CUPE members, or to try and unilaterally impose contract terms?
2.    What’s the benefit, if any,  to the Employer of taking the latter course over the former?
3.     How should CUPE 416 respond to the threat of a lockout or imposition of contract terms by the Employer?

What Happens When an Employee Works Past the Contract’s End Date?

This Blog Entry is About the Lunacy of...

The Folly of Not Voting to Strike in...

They dressed in 1970s fashions. Beautiful! All these guys were part of my 1970s childhood.

Tiger, Sittler and Lanny brought Borje Salming for a final trip to Maple Leaf Gardens less than two weeks before his passing. #LionsOfWinter

The fabulous house on the corner has the lights up again. Another reminder of how fast time passes and how lame all my holiday decorations are.

One of main reasons people join unions is to regain control over subjective managerial discretion.

In theory, “merit based” hiring sounds great. Who could disagree?

In practice “merit” means ‘the person I think would fit best’. Anyone think MPP children are most meritorious?

Human rights legislation prohibits employers from giving preference based on family status (ie being a daughter).

Explain whether any exception exists that permits the Doug Ford government to bounce their children around from job to job. https://twitter.com/jennyleeshee/status/1596978586678095872